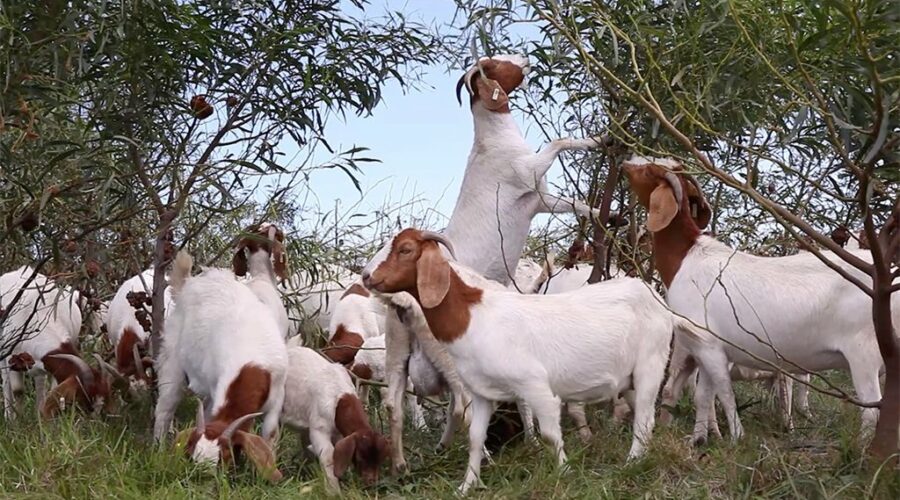 The mission begins at dawn on a small farm outside Cape St Francis in the Eastern Cape. It’s carried out under the banner of the Latin phrase “Semper Fidelis Est Mater Natura” – partly inspired by the motto of the United States Marine Corps – meaning “always faithful to mother nature”.

The army is transported to the drop zone, an area of disused farmland which, over many years, has been taken over by Port Jackson. The attack begins under the watchful eye of Pieter Bosman and an experienced handler.

A path is cleared through the impassable dense undergrowth. That’s the first phase of the operation.

Chainsaw-wielding reinforcements are then free to strike the final blow by felling larger trees in the second phase of the mission.

This is the work of Goat Army Africa.

The army comprises of 300 Boer goats. They have a fierce and insatiable appetite for invasive alien plants. The goats eat shrubs and tree canopies felled by their handlers. Alien saplings are quickly gobbled up.

Seeds of indigenous plants or grass can be added to the goats’ diet, which are then deposited in manure during the final clean-up of the area, if the mission requires it.

“They stimulate the grass by grazing and can browse on the tress, open pathways and trample tinder. They’re very intrigued. They’re roamers. So, they love to go into the thicket and create pathways where you couldn’t go in as a human.”

These operations are being carried out in other parts of the world. State agencies in California deploy goats to eat highly flammable vegetation ahead of the summer wildfire season. The same is being done in Australia.

“They’ve been clearing firebreaks for almost 100 years in California. It’s a very well-established practise internationally but I don’t know of anybody [else] doing it in South Africa,” says Bosman.

Bosman started farming in the Karoo after leaving high school, where he was first introduced to goats, but later chose to pursue a career in the film industry. The Covid-19 pandemic and associated lockdown restrictions crippled South Africa’s once-lucrative film sector and Bosman, together with his business partner Ronnie Visser, reverted to Boer goats.

The intention was to start intensive Boer goat farming on a small piece of land near St Francis Bay.

“And then I saw what they did to the Port Jackson on the property and the concept [of Goat Army Africa] started from there.”

Bosman’s army of goats have since been hired to clear alien vegetation on adjacent farms and on properties closer to Humansdorp.

A recent mission involving the clearing of moderate alien infestation on a 10-hectare piece of land – using 100 goats – took under two months to complete. In these cases, a single goat can clear up to 3.3 square-metres of alien vegetation every day.

In cases of high infestation, this clearing rate drops to between 1.5 to 2 square-metres per goat per day.

To supplement income, Goat Army Africa is in the process of marketing its own firewood, derived from trees felled during clearing operations. Rooikrans – also known as coastal wattle or Acacia cyclops – is an especially popular firewood in South Africa.

“In terms of nature conservation, the use of Kameeldoring and hardwood from Namibia is also not a sustainable practise.

“These alien plants have used our sun and our energy from the soil and minerals and water to grow into something… it would be a waste to just let that go to waste. Rather use this Rooikraans, instead of buying Kameeldoring or that sort of thing.”

Agritourism in the North-West Province